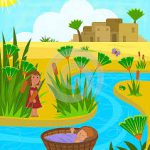 As the soft ripples of water carried the basket containing the little Musa (a.s) slowly and gently away, his sister kept a watch on it. To her surprise the waves pushed the box slowly towards the royal palace. A member of the Firawn’s household noticed the basket bobbing by the shore, and brought it to Queen Asiya, the wife of the tyrant Firawn. The queen was not a cruel person like her husband; she was a kind-hearted and loving woman.

When she saw the little soul lying there, she exclaimed: “This is such a lovely child that whoever sees him cannot help but love him.”

The news of the basket containing a new-born baby spread through the palace. When Firawn heard, he guessed that this must be the act of a woman from the Children of Israel, who was trying to save her child from his order to kill every new-born baby boy.

Firawn ordered that the child be put to death immediately. But Queen Asiya pleaded with her husband: “This child may bring joy to us both. Do not slay him.” The queen wanted to keep this baby boy. “He may show promise, and we may adopt him as our son,” Queen Asiya said. Firawn trembled with rage that anyone would dare to disagree with him. But finally the queen’s strong arguments touched his heart. In the end, Firawn relented and agreed that the child should be brought up in the palace under the queen’s care.

Queen Asiya was thrilled. But, to her surprise, the baby would not stop crying. She called a wet-nurse, but the baby would not feed and continued wailing. Several nurses were called, but none could feed him. As it says in the Quran: “Allah caused him to refuse his nurses’s breasts.” 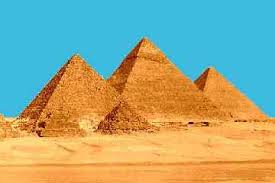 The pyramids were built thousands of years ago as tombs for the ancient kings of Egypt. About 70 have been discovered, 16 of which have been identified. They stand in the desert a few miles east of Cairo. Among the most famous are the tree great pyramids of Giza. A fourth pyramid was discovered there in 1932. The largest of all was made for Cheops (3733-3666 B.C) and dates back to the fourth dynasty. It measures 755 feet on each side, is 451 feet high and covers 13 acres. It took 100,000 men 20 years to build it, using 6,000,000 tons of stone. The mechanical aids the used are still a mystery to us today.