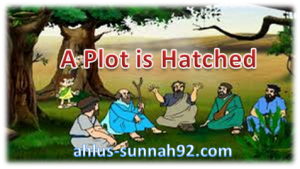 Finally the brother’s resentment reached the boiling point, and they went off to the hills where nobody could hear of see them. There they suggested something really outrageous. They said to each other : “Yusuf and his younger brother are dearer to our father than ourselves, though we are so many. Truly, our father is very much mistaken. Let us slay Yusuf, or cast him away in some far-off land, so that we may have no rivals for our father’s love, and after that be honorable men.”

As in their evil hearts they debated how to rid themselves of Yusuf (a.s), one of the brothers who had a soft spot for Yusuf (a.s) spoke out against killing him. “Do not slay Yusuf (a.s), but, if you must, rather cast him into a dark well. Some caravan will take him up” he said. They all liked the idea and agreed upon it. And they knew where just such a well was to be found. It was deep and had completely dried up.

But now, for their plot to succeed they had to deceive their father. So they made a plan to go on a false hunting trip outside the village, and all of them came to their father and pretended to be very sincere:

“Dear Father! Why don’t you trust us with Yusuf? We certainly wish him well. Send him with us tomorrow, so that he can play and enjoy himself.”

They assured their father that they would take good care of him. But Yaqub(a.s) sensed some mischief, and was unwilling to agree.

“I would feel very anxious if I let him go with you” said Yaqub(a.s), “in case some wolf came along and ate him up while you were off your guard.”

But the brothers persisted: “It would be shameful if the wolf devoured him while there are so many of us.” They convinced Yaqub(a.s) that ten strong, grown-up men would have to die before the wolf could touch young Yusuf!

Finally Yaqub(a.s) relented and put aside his fears, however reluctantly. What Yaqub(a.s) did not know was that the brothers did indeed have an evil intent, and that in saying he feared that the wolf might come and attack Yusuf(a.s) he had unwittingly given an idea to the wicked ones that would help them carry out their terrible plan. 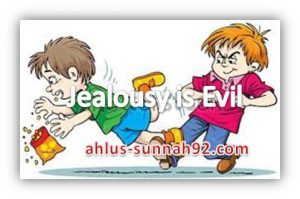 The prophet Yusuf’s (a.s) ten half-brothers were jealous of him, seeing his sublime personality and the attention and love that he received from their father. Jealousy is a base and poisonous emotion that cripples the heart. Only evil can come of jealousy, and that is why it is one of Satan’s favorite weapon.

It is very dangerous to be jealous on seeing someone’s superiority, or for any other reason. If allowed to grow, the seeds of envy can destroy even a believer’s heart and soul. So, if you find yourself having feelings of jealousy, repent and pray to the Almighty to grant you refuge from the mischief of Satan. Jealously is a proof that you are not content with Allah’s decision and are ready to be guided by the Devil.

In that state of mind you are unable to tell right from wrong or good from bad. Therefore, the Quran reminds believers: