A year later, when it was time to return to Egypt to obtain grain for the following year, Yaqub’s sons came to their old father. “Oh father!” they pleaded. “Unless we take Binyamin with us, all the grain of Egypt is to be withheld from us.” The father feared for his son, remembering what had happened to Yusuf (a.s). He asked: “Shall I entrust him to you as I entrusted his brother?” 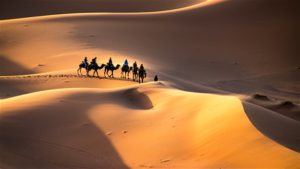 But they went on and on pleading with him. Their persistence and the urgent need for food finally made Yaqub (a.s) agree to send his youngest son with his ten half-brothers to Egypt. But before that, he took from every one of them a solemn promise before Allah, that they would indeed take good care of him and bring him back home safely, unless they themselves were ambushed. They all promised. It was a serious moment, and everyone pledged his life to protect Binyamin. Yaqub (a.s) said, Allah is witness to all that we say.”

Then the Prophet Yaqub (a.s) advised his sons: “My sons, do not all enter the city by one gate. Enter it by different gates.” He probably gave this advice in case the local people, seeing so many outsiders entering the city, tried to stop them. He added, “In no way can I shield you from the might of Allah. Judgement is His alone.”

Though Yaqub (a.s) gave worldly advice to his sons to enter the city in small groups, at the same time he showed the utmost trust in Allah, saying that whatever happened would only be by His will.

To the sound of harness bells tinkling and the grunting of animals, the brothers set out once again down the long dusty road to Egypt. This time they were eleven, as Binyamin was with them. They were now confident that they would be well received in Egypt and would be given all that they wanted.

They reached Egypt and entered the city in the way their father had told them. They went straight to the royal storehouse. When Yusuf (a.s) saw his young brother Binyamin, he could hardly hold back his tears of joy. It had been more than twenty years since he had seen his brother, who was now in his prime.

Yusuf (a.s) greeted all the brothers, and then took Binyamin aside and embraced him, and confided to him that he was his lost brother. He comforted Binyamin and said he should not grieve over the past doings of their half-brothers. He also told him not to let anyone know about this.

While the grain for Binyamin was being weighed out, Yusuf (a.s) put his drinking cup in his young brother’s packs. It was a gesture of great affection for his younger brother. Previously Yusuf (a.s) had done something similar when he put back into his brothers’ packs all the money they had brought to buy the grain. The brothers only realized this when they opened their packs once they were back home. This time too, no one knew of Yusuf’s gift. 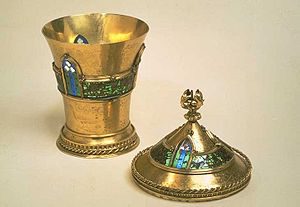 In the meantime, a measuring cup belonging to the king had been misplaced, and the courtiers suspected the brothers of stealing it. As the brothers passed through the streets of the city, a group of royal guards rushed up to them and shouted: “Oh you people of the caravan! Indeed you are thieves!”

They turned back, and asked: “What have you lost?”

“The king’s measuring cup is missing,” a guard replied. “Whoever brings it back shall have a camel-load of corn.”

“In God’s name,” they cried, “You know we did not come to do evil in this land. We are no thieves.

But the guards argued, “What punishment shall be his who stole it, if you prove to be lying?”

The brothers said that according to the Prophet Ibrahim’s law, which they followed, the victim of the theft would be entitled to take the thief as a slave in compensation for the crime committed against him.

The guards immediately agreed. When the packs were opened, there, glinting in the sun, nestled a precious cup – in Binyamin’s bag! This was not the cup they were actually looking for, but it was a similar one, a very expensive cup.

The brothers were terrified when the cup was discovered, but they showed no surprise, saying that Binyamin’s brother Yusuf (a.s) had also been a thief. Little did they realize that the king’s minister they were addressing was non other than Yusuf (a.s). Yusuf (a.s) showed restraint, saying only, “Your deed was worse. Allah best knows the things you speak of.”

In this way the brothers themselves decided the punishment for the guilty party, and Binyamin was kept back by Yusuf (a.s)

Under the king’s law such a punishment was not possible. But this was not a trick on the part of the Prophet Yusuf (a.s) to prevent his brother from leaving.