The journey to Syria 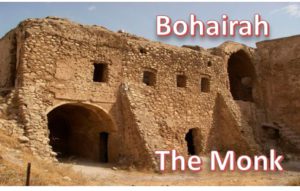 By this way, Abu Ta’lib agreed to let the prophet (peace be upon him) to accompany him to Syria. He mounted his nephew on the she camel beside him. After many days journey, the caravan reached a Christian Monastery at Busra, where, they stayed to pass night, a Monk was residing there since long, whose name was Jarjees but he was famous as Bohairah. Bohairah is an Assyrian word, which means genius one, an intellectual of the age.

It is said, the companions of Hazrat Issa (peace be upon him) were gifted with some specific knowledge, which went on transferring from one generation to another, and in that era, the Monk Bohairah was its sole trustee. The caravans of Quraysh used to pass from near that place but Bohairah never attended to them, and even he not liked to talk to them. But at his time, he observed a boy from amongst the caravan who was shadowed by a cloud; where he went, the cloud moved there to provide him shade. He also witnessed the tree bent to give him shelter when the boy had no room to sit underneath its branches.

When Bohairah saw the scene from the casement of his monastery, he speculated over the matter and conceived the boy, the truthful and trustworthy one, whose marks and signs were given in their religious books, and whom they were awaiting to come on fore. He decided to arrange a feast for the caravan, in which would participate, the boy and he would thus have an opportunity to meet him and examine the marks given in the books to test his envision.

Contrary to his routine, he went out from the monastery to the caravan, invited all the members to come and dine with him. The caravan was amazed by his conduct, so one of the members could not resist asking, “O Bohairah! We are astonished on your conduct, for we have passed from here many a time, you never gave attention to us but contrary to your routine, you came to us and honoured us inviting on the feast. Would you please like to apprise us the difference in your attitude?”

Bohairah, to subside the matter said, “After all, you are our guests and to honour and offer banquet to the guests is our moral duty.” When the time came, all caravan attended the feast; the monk heartily welcomed them but whom he was anxiously waiting for, did not came to his view. He asked as if anybody was missing? He was told that none but a lad who remained behind to look after the camels and the tents of ours. He insisted to bring him and every body else, though big or small, free or slave; nobody from amongst the caravan should remain behind. Thus went out, his Uncle Harrith bin Abdul Muttalib and brought the Prophet (peace be upon him) to the venue of the feast. Satisfied, to see His Illustrious Majesty there, Bohairah absorbed in gazing the Prophet (peace be upon him) wistfully.

When the dinner was over, Bohairah let all the participants go but the Prophet (peace be upon him). He came near him and to test, he said, “I give you swear of Laat and Uzza”, you will answer me correctly what I am to ask you.”

The prophet (peace be upon him) replied, “Do not ask me any thing for the sake of these idols, by God! I have never hated any thing more.”

Then Bohairah said, “And then tell me in the name of Allah, what I ask from you”.

The prophet (peace be upon him) said, “Now ask me what ever you want to ask, I shall answer correctly”

He carried on asking him about the state of his sleep and awake. The answers of the Prophet (peace be upon him) verified the virtues specific for the Last Prophet of Allah, written in the books.

In the last, he wrapped his tunic up and witnessed the seal of Nabuwat on his back. He found the seal as he had kept with him and he kissed it.

The men from the caravan amazed with the sight, talked of the reverence and respect the Monk had in his heart of the innocent Muhammad (peace be upon him). Bohairah having finished with it asked Abu Ta’lib as to what was he to him? Abu Ta’lib told that he was his son but the Monk said, “He is not your son, nor his father can alive.”

The Hazrah Abu Ta’lib told him that he was his nephew.

Bohairah: Where is his father?

Abu Ta’lib: His father passed away when he was in his mother’s womb.

Bohairah: Now you told the truth, where is his mother then?

Abu Ta’lib: She passed away as well sometimes back.

Bohairah: Please go back to your land. Keep him away from the Jews for if they came to know what I know, they will not refrain from harming him. Your nephew will have glory; this is what is written, in our books and what our ancestors told us.

I have apprised you of the reality, my duty is over, leave at once for your land.