One of the world’s earliest civilizations was born, about 5000 years ago, in ancient Egypt. Egyptian civilization owes its existence to the life-giving presence of a mighty river – the Nile.

The Nile’s annual flooding deposited a wide layer of rich soil along both sides of the river that produced bountiful harvests. Year-round irrigation was possible. It was also the main “roadway” for transportation and communication. 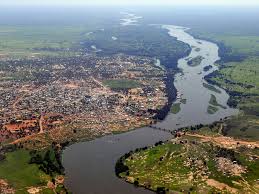 Agriculture was the mainstay of Egypt’s population of 1-4 million people. Farmers grew wheat and barley mainly, but also lettuce, beans, onion, figs, dates, grapes, melons and cucumbers. Many farmers grew flax, which was used to make linen cloth. They also raised livestock – dairy and beef cattle, goats, ducks, geese and donkeys. Beekeeping for honey was popular among some.

Manufacturing was done in small shops, with linen clothing and textiles the main industry. Small shops produced all the other goods Egyptians needed to live and work, such as pottery, bricks, tools, glass weapons, and furniture. Such things as rope, baskets, mats and sheets of writing material were made from plants. Egyptian women liked perfume and jewelry, and craftsmen were skilled at making these things.

The royal household and the temples employed architects and engineers and many skilled craftsmen.

Ancient Egypt was rich in minerals. Large deposits of limestone, sandstone and granite were mined to build pyramids and other monuments. Tin and gold was also mined. 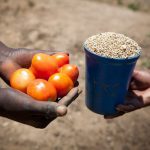 At the time of our story Egypt did not have a money economy. Goods and services were traded directly for other goods and services. This is called a barter system. Workers were paid in wheat and barley to exchange for clothing, cooking utensils or whatever else they needed.

Egypt carried on a lively foreign trade with Syria, Lebanon and other parts of southwestern Asia to the northeast, and with Nubia to the south. Egypt traded gold, other minerals, wheat and barley, and also papyrus sheets for the wood, iron, horses, ivory, copper, cattle and spices that it needed but did not have. Caravans plied the land route to the northeast, and Egyptian ships sailed up the Mediterranean coast and up and down the Nile.

The ancient Egyptians, a highly cultured people who knew a great deal about life and death, were skilled in art and architecture. Ancient Egypt’s pyramids are the oldest and largest stone structures in the world. The first pyramids were built about 4,500 years ago, and the largest, the Great Pyramid at Giza, which is one of the Seven Wonders of the Ancient World, was built with more than 2 million limestone blocks, each weighing an average of 2.3 metric tons! Temples were also build of limestone. Parts of the temples were designed to resemble plants: for example, columns carved to look like palm trees or papyrus reeds. 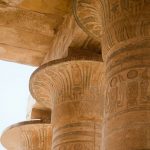 The finest paintings and other works of art were produced for tombs and temples. Artists covered the walls of tombs with bright, imaginative scenes of daily life and pictorial guides of the afterlife. These paintings were done very seriously and beautifully, for the Egyptians believed the scenes could come to life in the next world. Temples were decorated with carving showing festivals, military victories and other important events. Sculptors also carved large stone sphinxes, the statues that were supposed to represent Egyptian kinds of gods and were used to guard temples and tombs.

Craftsmen employed by the royal families and by the temples could make almost anything: carved figures and personal ornaments from wood, ivory, alabaster, bronze, gold and turquoise, harnesses and every sort of implement. A favorite subject for small sculptures was the cat, which the Egyptians considered sacred and valued for protecting their grain supplies from mice.