Yusuf (a.s) set about his important duties. As second in command to the king, and with the blessings of Almighty Allah, Yusuf (a.s) traveled the length and breadth of Egypt. In every city he gave orders for huge storage buildings to be put up, to hold grain. 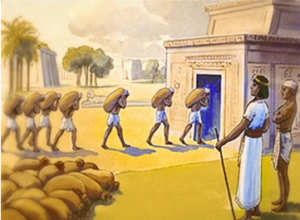 Recognizing his power and his talent for organization, people in all of Egypt’s cities were glad to do as he bade. For seven whole years, they amassed plentiful harvests. There was grain without measure, piling up until it was like the sands of the desert. It was loaded on to carts to be dispatched to places where it was most needed and also sent down the river by barge from the great Nile delta.

The granaries were gradually filling up, for Yusuf (a.s) had managed everything with superior skill. When the seven years were almost over, he saw that there was enough grain to see them through the hard times that were coming. He had successfully completed his preparations. 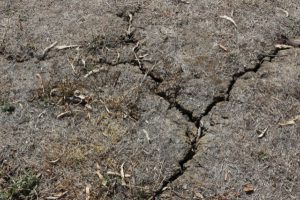 The seven good years passed and the times of prosperity went by. Then came the seven lean and hungry years, when no crops would grow. Now, famine held the land in its grip. The whole of Egypt was hit by it. The skies became white and hot and stayed that way; never a drop of water did they let fall upon the land. The land cracked, and the dry wind whipped up storms of dust. The Nile shriveled, people began to starve and animals began dying. Famine was everywhere.

Now, Yusuf (a.s) was busier than ever, distributing and selling the grain that had been saved and seeing that it was fairly shared out. Soon people from nearby countries, who were also hit by famine, heard that there was grain in Egypt.

Many countries on the shores of the Mediterranean looked to Egypt as a source of food. Caravans came from all directions – from Syria and Arabia and the coast of North Africa – all hoping to buy grain or barter for it. Yusuf (a.s) had foreseen these countries’ needs and had set aside enough foodstuffs for the purpose. But he restricted each trader to just one camel-load. That was as much as could fairly be given.

Back in the land of Canaan, Yaqub (a.s) and his sons were hit by the famine too. Like everywhere else, food had become scarce in their land too. When he came to know that people were traveling to Egypt for grain, Yaqub (a.s) asked his sons to go there to fetch some grain for the family, as there was hardly anything to eat. Only Binyamin did not accompany them, for Yaqub (a.s) could not endure being separated from him. He was very anxious about him – the only real brother of Yusuf (a.s).

The ten brothers loaded their camels and began the slow journey to Egypt. After the long tiring trek, they finally arrived. Reaching the royal storehouse to buy grain, they presented themselves to the chief of the storehouses, the king of Egypt’s minister.

Although it had been about 20 years since he had seen them, Yusuf (a.s) recognized his brothers immediately. They – not surprisingly – did not recognize him. How could they have ever imagined that the young boy they had thrown down a dry well could have survived, much less risen to such a high rank?

What more could we ask for?

Yusuf (a.s) received his brothers honorably but did not tell them who he really was. In the course of conversation he asked about their situation and about the number of people in their family. They told him that they had old parents and one younger brother.

Yusuf (a.s) gave them enough provisions and treated them liberally – one camel load for each. The brothers requested an extra camel load for the brother who had not come. Yusuf (a.s) saw the chance to meet his younger brother, Binyamin, whom he longed very much to see, and explained that only those who were present could be provided for: “Next time, come with your brother. You have seen my generosity.”

An argument probably followed, and Yusuf (a.s) said forcefully that if they did not bring their brother, they could be considered to be lying. He threatened that no grain would be given to them in the future if they failed to bring the brother whom they had mentioned.

“We will do our very best to persuade our father to part with him,” the brothers said.

When they were preparing to leave, Yusuf (a.s) had their money and merchandise put back into their packs. The happy band left Egypt with enough provisions for the entire year.

When they got back home and opened up their packs and found that their money and merchandise had been returned to them, they were thrilled with the kindness and generosity the king’s minister had shown them. Their opinion of the keeper of the storehouses soared, and they were emboldened to ask Yaqub (a.s) if the could take Binyamin with them the next time.

“Oh father! What more could we ask for? Here is all our stuff – it has been returned to us!” they exclaimed to Yaqub (a.s). If you will just send Binyamin with us, we shall again be able to bring food for our family. We promise to guard our brother well.”

But Yaqub (a.s) was reluctant. Though many years had passed, the memory of Yusuf (a.s) was still fresh in his mind, and he could not bear the thought of losing another child.