The story of the Prophet Yusuf (a.s) most likely took place during the rule of one or the six Hyksos kings who ruled Egypt from about 1500 to 1580 B.C., after invading the country from the east across the Sinai Peninsula. The name of this dynasty, certainly foreign in origin, comes from the Egyptian hiq shasu or heku shoswet, meaning “rulers of nomad lands,” or – according to the late Egyptian historian Manetho – “shepherd kings.”

The native people of Egypt were Copts, by their own account the descendants of Ham, one of the Prophet Nuh’s sons. It is believed that the Hyksos were Arabs who had largely kept to their Bedouin way of life, despite the fact that, before their invasion of Egypt, they were already well established in Syria. This would explain why the king in this story was later to place his trust in Yusuf (a.s), and it would also explain the subsequent happy settlement in Egypt of Yaqub’s family – the Children of Israel.

The Hebrews, too, were descended from one of the many Bedouin tribes who some centuries earlier had left the Arabian Peninsula for Mesopotamia and later for Syria. The language of the Hyksos must have been very similar to Hebrew, which, after all, is an ancient Arabian dialect. 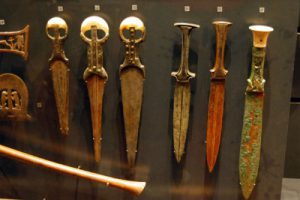 The Hyksos were as advanced as the Egyptians in many ways, and in military technology they were superior. They bought new and powerful weapons to Egypt. They made spear points, arrowheads and battle-axes from bronze, a copper and tin alloy that was much stronger and could be made sharper than plain copper. They made bows of composite materials: laminated wood, horn and sinew that were stronger and gave more thrust to the arrow. Finally, they had horse-drawn chariots from which to wage battle.

These military advances contributed to Egypt’s power later on. The Hyksos rulers established their capitol at Avaris in the delta. They exacted tribute from the nobility and landowners of Upper Egypt based at Thebes, but were careful not to disturb the culture of Egypt, and actually adopted many of the local ways. They learned and used hieroglyphic writing and used traditional Egyptian titles in their royal court. They were accepted as legitimate rulers by many Egyptians and ruled for about 100 years.

But in Upper Egypt resentment over “foreign” domination continued to boil, and finally in 1560 BC, Ahmose I of Thebes began the decisive campaign that would capture Memphis and ultimately take over the Hyksos capitol of Avaris, driving the Hysos back across the Sinai to Palestine.