In this sacred journey, Allah ﷻ exposed His greatest signs to His beloved Prophet ﷺ, in addition, some effects on the actions of the man were depicted to him in embodiments for the followers of the Prophet ﷺ to be taught lessons. 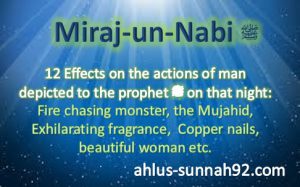 When the traveler of the destination of “Qaaba Qawsain” commenced his journey from Haram, Jibraeel (a.s) was holding the stirrup of the Buraaq and Mikaeel the reins. After moving for a short time, they reached a place the orchards of the date’s tree, where Jibraeel (a.s) besought the prophet ﷺ to offer his prayer; he did as he was besought. Jibraeel (a.s) asked the prophet ﷺ whether he knew the place he had offered his prayer, he replied in no and the Jibraeel (a.s) told him, it was Tyba, the place of his Hijrah.

Then the Buraaq with fastest speed journeyed to its destination. Its speed was so fast that it covered the distance in a step; equal to the distance, its eyesight could cover. Then Jibraeel (a.s) supplicated the prophet ﷺ to dismount and offer the Nafl prayer; the prophet ﷺ did so and continued his journey again. Jibraeel (a.s) told the place was Toor-e-Sina, where Allah had spoke to Musa (a.s). When the Buraaq reached Bait-ul-Lahm, the birth place of Isa (a.s), the prophet ﷺ also offered his prayer there.

The journey goes on; by the by, the prophet ﷺ saw a monster with fire chasing, Jibraeel (a.s) asked the prophet ﷺ whether he wanted to be told the words that if he recite, the fire would be extinguished, and the monster would fall by its mouth. The prophet ﷺ replied in affirmative and Jibraeel (a.s) taught him the following words:

The prophet ﷺ recited the words, the fire of the monster extinguished accordingly, and it fell by its mouth.

The prophet ﷺ then saw a nation that sow the seeds and reaps the crops next day and it starts waving a fresh. The prophet ﷺ asked Jibraeel (a.s) what it indicated, he told, “These are the Mujahid, whom Allah rewards seven hundred times for their virtues and what they spend, He recompenses at the same time.”

Then the prophet ﷺ smelled a very exhilarating fragrance, Jibraeel (a.s) told him, it was the fragrance of the beautician of the daughter of Pharaoh. The event of her is that one day, when she was combing the daughter of Pharaoh, the comb dropped from her hands. She exclaimed, “I pick it up in the name of Allah, He may perish Pharaoh. “He is a false lord.” Her mistress asked her if she had another Lord of her than her father. She replied in yes and said, “Above doubt, mine and yours Lord is Allah.” She had two sons of her and one husband.

When Pharaoh heard of her he summoned them all. When they appeared, Pharaoh urged her and her husband to recognize him as their God. They refused and then he gave them threat that he would slay them all. They both in response said, “It will be grace of yours if you slay and burry us together in one house.” Pharaoh got a copper caldron red hot and enjoined his men to throw the beautician and her family in the caldron. His men threw her innocent sons in the caldron and the sucking baby said to his mother, “O my mother! Keep patience; abstain from turning your face from the truth for you are the truthful one.”

Then the prophet ﷺ passed by a nation whose heads were being smashed but at the very moment they were gaining their state a before. The prophet ﷺ asked Jibraeel (a.s) the cause; he told, those were the people who did not offer their prayers.

Then the prophet ﷺ saw the people clad in rags, grazing Zaire (a weed) and Zaqqum like the camels and the goats. On query, Jibraeel (a.s) told, those were the people who did not give Zakat from their properties. Allah did not torment them but they themselves.

Then a nation came to his view in whose one pot was very deliciously cooked meet but in the other bad smelled. They did not eat the delicious but were eating the rotten one. The prophet ﷺ was told about them that they were the people who had the pure and sacred wives of theirs but they used to sleep with the whores and the women, who despite of a gentle husband of her, attends to the bad men, will be treated likewise.

Then the prophet ﷺ passed from a wood, the thing or the cloth happens to be near it, it always tore it into pieces. The prophet ﷺ asked about it and Jibraeel (a.s) told, those were the people of his Ummah who would sit and conduct courts in the streets and would cross the way of people.

Then the prophet ﷺ saw a person swimming in the canal of blood, and his mouth was being filled with the stones; on asking, Jibraeel (a.s) told, he was the usurer.

Then he saw a man carrying a massive bundle on his head, which was continuously growing. The prophet ﷺ asked and Jibraeel (a.s) told he was the man who had trusts of the people with him, but he did not return these to their owners rather he would be desirous of more and more.

Then he saw a horrible scene that tongues and the lips of the people of a nation were being cut with the scissors but at the same time, they were growing a fresh and the process was perpetual. The prophet ﷺ asked and Jibraeel (a.s) told, they were the mischievous orators of his Ummah.

Then the prophet ﷺ saw the people with copper nails who were scratching their breasts and faces with them. Jibraeel (a.s) told those were the people, who ate flesh of the people and slandered i.e. the backbiters.

The journey goes on; beautiful and adorned woman with her head bare met the prophet ﷺ on his way, she supplicated, “Ya Rasoolallah! Give attention to me, I want to put some questions.” Nevertheless, the prophet ﷺ did not heed to her and asked Jibraeel (a.s) as to who she was. Jibraeel (a.s) told him it was the world; if you have heeded to it, your Ummah would have preferred this world to the world hereafter.

In the end, the prophet ﷺ reached Jerusalem. The prophet ﷺ and Jibraeel (a.s) offered two rakats each over there. After a short while, people gathered there; the Muazzin uttered the Azan and said Aqamat, all were awaiting as to who would do the Imamat, Jibraeel (a.s) held the hand of the prophet ﷺ and made him stand on the prayer mat. Behind him all the apostles of Allah ﷻ offered their prayers. After prayer, Hazrat Ibrahim (may Allah ﷻ be pleased with him) delivered the sermon, in which after praising to Allah ﷻ, he reckoned the graces of Allah ﷻ bestowed him. He said:

“All praises are for Allah, Who made me His friend, bestowed with the land (made me His obedient, whose obedience people do.) He saved me from the fire and made it cool and peaceful for me.”

In the end, the last prophet ﷺ took the floor and said, “You all have praised my Lord, now I embark on praising Him.” Then the prophet ﷺ delivered the following sermon:

“All the glories be to Allah, Who sent me as embodiment of blessings for all the worlds. And sent me to all the people to tell them the fear and the glad tidings and revealed unto me the Furqaan in which is evident everything. And made my Ummah better that all and created it for the betterment of the people. And made my Ummah, the Ummah of the middle; it is but the first and as well as the last. He bestowed me with the blessing of open heart; He dislodge my burden, elevated my mention and made me conqueror and the Khatm, the Last.

Listening to these lively words, Hazrat Ibrahim (may Allah ﷻ be please with him) said to the apostles, “Because of these blessings and bliss, Muhammad ﷺ excelled us all.”