The palace was a place of endless delights and discoveries for Musa (a.s). A favourite of the guards and attendants, the little prince roamed far and wide, playing and dreaming in the lovely gardens, running down the long corridors, in and out of the kitchens and workshops, visiting the carpenters, the masons, the potters and jewellers. 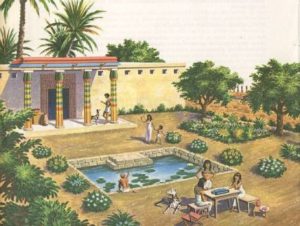 Queen Asiya spent time with Musa (a.s) every day, telling stories and teaching him the language of Egypt. From this other mother, Yukabid, Musa (a.s) learned about the great prophets Ibrahim, Yaqub, Yusuf (upon all of whom be peace), and the Children of Israel, and their steadfast belief in Allah.

Though from a young age Musa (a.s) had some difficulty speaking fluently, he was an excellent student. There was only one thing he had trouble understanding: why did Egyptians believe in so many gods? He came back to this question again and again as he grew up, and walked and thought in the palace gardens. He asked Yukabid whenever he met her. Musa’s mother always reminded him that it was the One God who had saved his life and was now preparing him to do something great.

And in his heart, Musa (a.s) knew that she was right.

An ancient Egyptian wall picture shows how badly pharaoh treated his subjects. Here he is holding some prisoners by their hair. 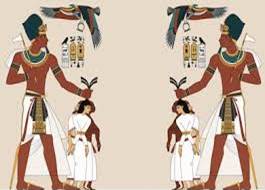 By the time Musa (a.s) was born, in the thirteenth century B.C, the Tribe of Israel had become a slave class if Egypt. Pharaoh and his priests and magicians ruled. They said the Israelites were worthless people, fit only to do the hardest work in the land making mud bricks, hoeing the earth, carrying heavy loads and cleaning up after the ‘superior’Egyptians.