There was chaos in the palace, but Musa’s sister, who had followed the basket containing the child to the palace, managed to send word to the Queen about a “particular nurse” who could bring him up and take good care of him. Queen Asiya was pleased to hear that. She immediately sent for this nurse. 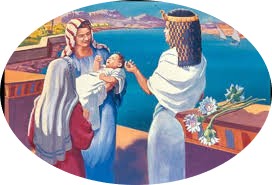 When Yukabid came to the palace, the queen did not know that she was the real mother of Musa(a.s). Queen Asiya explained the situation and handed the baby into her care. As soon as Musa’s mother took her little baby in her arms, stopped crying and fed happily. The queen was delighted to see this and sighed with relief: the baby’s life was now out of danger.

And thus, as the Quran tells us, Allah restored Musa (a.s) to his mother, so that her eyes might be cooled from weeping and she should grieve no more and would know that Allah’s promise was fulfilled (20:40).

Musa’s mother was overjoyed, and thanked Allah from the depths of her heart. She thought how strange it was that her child would now be brought up in the palace of Pharaoh, the very same person who had ordered that all the new-born baby boys of the Children of Israel be put to death! 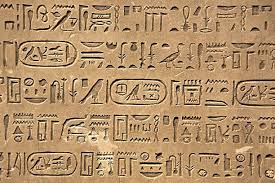 The ancient Egyptians developed a writing system called hieroglyphics using consonants and picture symbols instead of an alphabet as we know it.

Hieroglyphs were called “the words of the gods”. They were only used for official texts. At that time – 3000 B.C- only a handful of Egyptians could read and write. They were the scribes. The scribes had a very high place in Pharaoh’s palace and in society. They were the only ones who could record things, and Pharaoh depended on them to run his administration – civil, military and religious. The Egyptians used stone tablets, and they also discovered a way to make paper with the papyrus plant.

In hieroglyphics, the consonant symbols were combined with pictures, or ideograms, to give the whole meaning of the world. Since the ancient Egyptians did not write any vowels, many different words would have looked the same without the picture symbol.

Some words were so common place they were often written with ideograms only; like “People”

The understanding of hieroglyphics was lost for many hundreds of years after the decline of the ancient Egyptian civilization. In 1799 French soldiers on a campaign in Egypt with Napoleon found a black stone with an inscription in both hieroglyphics and Greek, called the Rosetta Stone, which gave the first clue to solving this mystery.