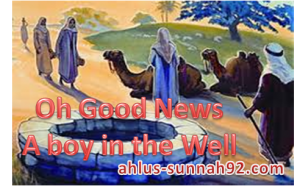 While his dear father sorrowed for him, Yusuf (a.s) lay at the bottom of the dark well, terrified because there was no way to get out. In the meantime, a caravan coming down from Syria and heading for Egypt was traveling through Palestine. In those days, people mostly battered their goods, rather than use money. So they had to carry a lot of things, and these things had to be well guarded.

This caravan was carrying apricots, dried apples, figs, spices, balm and incense. It also carried woolen cloth, and some other goods. All of these things were packed in saddlebags carried by the camels, whose broad feed spread comfortably on the sand tracks.

Although the camels’ movements were silent, there was a constant tinkling sound of their halter bells. There were also the long, low calls, made by the camel-drivers, one by one, as they moved at an even pace along the well-known track. They were expecting to reach the next well very soon, and when they did, the water carrier was sent off to draw some water for the animals and the travelers.

Suddenly, the water-carrier cried out: “Oh, good news! Here’s a lucky find! A boy at the bottom at the well!”

Everyone ran across to see, and sure enough, there was Yusuf (a.s), clamoring to get out of the well. They sent down a rope; he tied it around his waist, and they hauled him up. Imagine the travelers’ surprise when they saw a good-looking  boy with a face as bright as the sun! He looked as innocent as an angel, and had a very fine appearance.

Instead of returning the child to his family, they decided to take him with them to Egypt and sell him at the slave bazaar. They reached the borders of Egypt and their journey was almost over.

Many, many years ago, long before there were cars or airplanes, when people had to go on long journeys across desert lands, they arranged to travel together in large groups. That way it was safer. Just to cross the Sinai Desert took almost two months, and there was always the risk of being attacked by bandits. They would walk, ride on camels or horses, or sit in wagons. 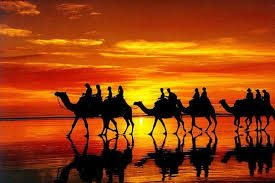 The whole group was called a caravan. To avoid the heat of the day in summer, the caravan would move at night. In winter it would travel around the clock. The caravan,  with hundreds of people, would move like a whole city under the leadership of the amir, who was like a ship’s captain. The caravan was usually accompanied by a troop of soldiers, with outriders and guides. To keep up their spirits, they sang as they traveled onward, and at night they stopped to build fires and bake their bread on hot stoves. Then they would sit around the fires, telling the old stories of their tribe. In the morning they would set off again on the long slow trek.

In the days of Yusuf (a.s), in Egypt and all over the world, rich people had slaves to serve them. People acquired slaves in different ways: they were either prisoners of war, or they were children who had been sold by poor parents, or they were people who, alone and unguarded, had been kidnapped.

Often slaves were able to earn their freedom, or their master freed them. Very often they became important people in society. Sometimes they became great scholars and leaders.

Yusuf and the Aziz