Blessings from reciting the last two verses of Surah Al-Bakarah

‘Whosever recites the last two verses of Surah Al-Baqarah at night, these will suffice for him.’ said the Holy Prophet (peace be upon him) as reported by Abu Mas’ud (Bukhari, pp. 405, vol. 3, Hadith 5009)

Shaitaan will not come close to the house in which these two verses will be recited for three consecutive nights.

The Holy Prophet (peace be upon him) said “two thousand years before the creation of the earth and the skies, Allah wrote a book, and then from this, He revealed the last verses of Surah al-Baqarah. Shaitaan will not come close to the home in which these two verses will be recited for three consecutive nights.’ as reported by Nu’man bin Bashir (r.a) (Sunan-ut-Tirmizi, pp. 404, vol. 4,Hadiš 2891)

Abu Zar (r.a) reported that the Holy Prophet (peace be upon him) said, ‘The final two verses of Surah al-Baqarah are from that treasure of Allah which is beneath the Divine Throne. Allah bestowed me with these two verses; learn these and teach them to your women as these are Mercy, nearness to Allah and Du’a [supplication].’ (Darimi, pp. 542, vol. 2, Hadiš 3390)

Translation of the last two verses of Surah Al-Bakarah

The Messenger has believed in what was revealed to him from his Lord, and [so have] the believers. All of them have believed in Allah and His angels and His books and His messengers, [saying], “We make no distinction between any of His messengers.” And they say, “We hear and we obey. [We seek] Your forgiveness, our Lord, and to You is the [final] destination.”

Allah does not charge a soul except [with that within] its capacity. It will have [the consequence of] what [good] it has gained, and it will bear [the consequence of] what [evil] it has earned. “Our Lord, do not impose blame upon us if we have forgotten or erred. Our Lord, and lay not upon us a burden like that which You laid upon those before us. Our Lord, and burden us not with that which we have no ability to bear. And pardon us; and forgive us; and have mercy upon us. You are our protector, so give us victory over the disbelieving people.”1

1 Allah concludes this surah by directing His servants how to supplicate Him, just as He taught them in Surah al-Fatiḥah how to praise Him and ask for guidance. 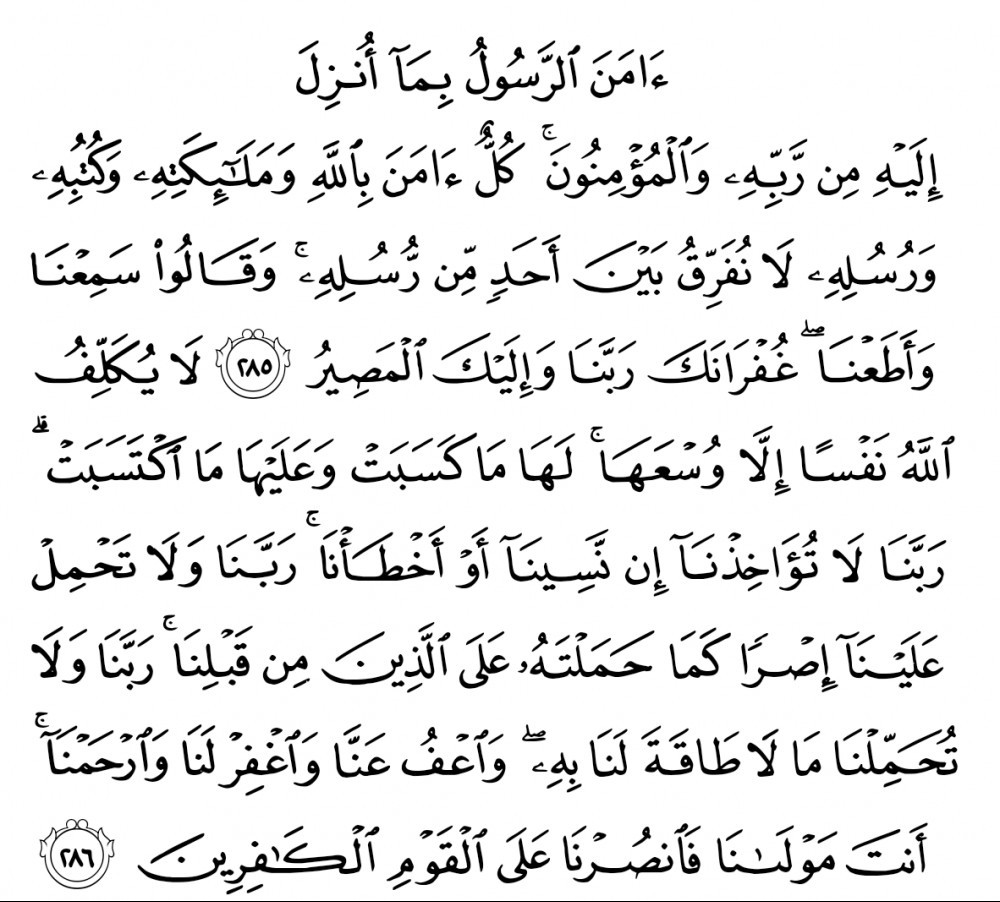 The Messenger believes, and so do the believers, in the guidance sent down upon him from his Lord: each of them believes in Allah, and in His angels, and in His Books, and in His Messengers. They say: “We make no distinction between any of His Messengers. We hear and obey. Our Lord! Grant us Your forgiveness; to You we are destined to return.”1

1 This verse outlines what one is required to believe in and what should be the distinguishing characteristics of one’s conduct. They consist of the following: belief in God, in His angels, in His Books, in all His Messengers (instead of some rather than others), and in the fact that ultimately one will have to stand before God’s judgement. These are the five fundamental articles of faith in Islam. Having accepted them, the only proper attitude for a Muslim is to cheerfully accept and follow whatever directives he receives from God. Instead of exulting in his moral excellence he should be humble and should constantly seek God’s forgiveness and mercy.

Allah does not lay a responsibility on anyone beyond his capacity.1 In his favour shall be whatever good each one does, and against him whatever evil he does.2 (Believers! Pray thus to your Lord): “Our Lord! Take us not to task if we forget or commit mistakes. Our Lord! Lay not on us a burden such as You laid on those gone before us.3 Our Lord! Lay not on us burdens which we do not have the power to bear.4 And overlook our faults, and forgive us, and have mercy upon us. You are our Guardian; so grant us victory against the unbelieving folk.”5

1 Man’s answerability to God is limited by the extent of his ability. If a man does not have the ability to do a certain thing, God will not take him to task for not having performed it. In the same way, if it is really beyond a man’s ability to abstain from something, God will not blame him for having failed to abstain from it. It should be noted here that man will not be the final judge as to whether he had the ability to do something or not. Such judgement will be made by God alone.

2 This is the second fundamental principle of God’s law of retribution. Every man will be rewarded for the services he has rendered; none will be rewarded for services rendered by others. The same applies to punishment. It is the one who is guilty who will be punished. It is possible, however, that if a man has initiated either good or bad practices, they will continue to affect people’s lives. The resulting good and bad deeds of people will be reckoned either to their credit or against them, since they are clearly related to their efforts and actions. It is impossible, however, that a map should be either rewarded for an act of goodness or punished for an act of evil in which he has had no share – neither by intent nor practical action. The requital of acts is not transferable.

3 The prayer made here is that God should not subject them to the severe tests and the terrible persecutions and hardships undergone by their predecessors. It is God’s law that those who commit themselves to follow Truth and righteousness are subjected to severe tests and tribulations, and it is a believer’s duty to meet them with patience and fortitude. At the same time, the believer should always pray that God may make it easy for him to follow the path of Truth and righteousness.

4 Believers pray to God not to place upon them a burden beyond their capacity of endurance, and to subject them only to those tests from which they may emerge triumphant. May it not happen that the hardships are too much for them to bear, and that their feet falter and are turned away from the path of righteousness,

5 In order to appreciate fully the spirit of this prayer, one should remember that these verses were revealed on the occasion of the ascension of the Prophet, a year before his migration to Madinah. At that time the struggle between Islam and unbelief had reached its climax. Not only in Makkah, but throughout the Arabian peninsula, there was no place where the lives of those who wished to follow the religion of God had not been made extremely difficult. In these circumstances the Muslims were told in what manner they ought to pray to their Lord. It is obvious that if the bestower himself tells one how to present one’s request, the granting of the request becomes virtually assured. Hence, this prayer greatly strengthened the hearts of the Muslims.

Moreover, this prayer implicitly taught the Muslims not to allow their feelings to flow along undesirable channels. They should instead mould them into a prayer to their Lord. Think of the heart-rending cruelties to which the Muslims were subjected merely because of their devotion to Truth, and then turn to the contents of this prayer, where there is no trace of bitterness against the enemies. Consider the physical afflictions and material losses which the Muslims suffered, then note how this prayer does not contain the slightest hint of worldly ambition. Compare the wretchedness and misery of these devotees of Truth with the pure, exalted feelings with which this prayer is overflowing. This comparison will enable us to appreciate the nature of the spiritual and moral training provided to men of faith.

Blessings from reciting the last three verses of Surah Al-Hashr

Blessings from reciting the last three verses of Surah Al-Hashr