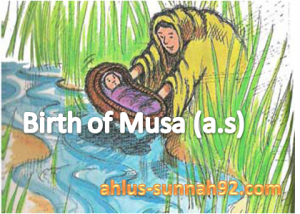 During these dreadful times a pious woman of the Children of Israel, whose name was Yukabid, gave birth to a beautiful boy who later came to be known as Musa (a.s) or, in English, Moses. His father’s name was Imran. The parents of the little Musa (a.s) were convinced that their young baby would soon be put to death by the cruel soldiers of Firawn, who were always on the lookout for a new-born baby among the families of the Children of Israel.

As Musa’s (a.s) mother worried about this one day, something unusual happened. She was told by Allah that this was a very special child, and that one day he would become a great prophet. Allah inspired Yukabid to put her little baby into a box and cast it into the river Nile. Allah promised her that Musa (a.s) would be safe and would soon be returned to her.

Yukabid carried out Allah’s orders with hope and confidence. Still, her heart beat rapidly with worry and excitement as she walked down to the river bank and gently put the box containing the baby Musa (a.s) into the water. The baby’s sister, whose name was Qulthum, hid nearby, crouching at the edge of the Nile, to see what would happen to him.

The Nile, the mightiest river in Africa, is 6,700 kilometers in length. It starts in Lake Victoria and flows through Sudan and then Egypt to the Mediterranean. It brings water in plenty countries with little or no rainfall. There its water has been used since ancient times for farming and all other purposes. Without the Nile waters, there would be no lush green fields and people would go thirsty.