The Children of Israel 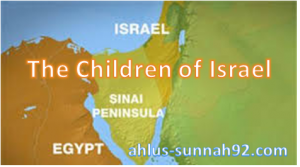 Long long ago, more than 3000 years ago, there was a famine in the land of Egypt. The crops would not grow and people were starving. The famine spread to the nearby land of Israel. During this dreadful time, Prophet Yusuf (a.s), who was working in Egypt as the King of Egypt’s minister, invited his father, Prophet Yaqub (a.s), to come from the land of Israel to Egypt. Yaqub (a.s) accepted the invitation, and so Yusuf’s (a.s) parents and all his brothers, along with their families, moved to Egypt. As guests of the king’s minister, they received a very warm welcome.

After some time things improved, rains came, and the people in Egypt and Israel were able to get food. But Yaqub (a.s) and his family stayed on in Egypt, making it their home forever. As the years went by Prophet Yaqub’s (a.s) family grew, and became a large tribe which was later known as the Israelites, or the Children of Israel. (In Arabic, they were known as Banu Israil). They were given this name because Yaqub (a.s), who was the father and head of this tribe, also had the name of Israel.

For four hundred years the Children of Israel lived peacefully in Egypt. The Ramses II became the king of Egypt. He was called Firawn or in English, Pharaoh, which means king. Firawn was very cruel and mean. He made the Children of Israel his slaves. They were forced to do the hard labour of building huge monuments and structures for the Firawn, such as the pyramids. Firawn used his soldiers and police to torture them to get his work done.

From then on, the Children of Israel lived in great fear and suffering.

The lands of Egypt

Egypt, still famous as the land of the pyramids, lies in the north east corner of Africa. It can trace its history back more than 3,000 years before the birth of Prophet Issa (a.s). For a very long time its people were pagans, bowing to idols and practicing magic. They worshiped their kings as if they were gods. They knew nothing of the true source of power until Prophet Musa (a.s) came to tell them. It was not until nearly the end of the seventh century that Egypt became an Islamic country.

From his mother, Musa (a.s) learned about the history of his own people – how Ibrahim (a.s) having destroyed the idols of his city, had been thrown into the fire to die, but, by the miracle had escaped unhurt; and how the Children of Israel were all descended from him. His favorite story was how Yusuf (a.s) had been tricked by his brothers, brought to Egypt, and sold as a slave there, where he became powerful and famous. It was Yusuf’s (a.s) who had brought all of his tribe to live with him in Egypt, and they had been there ever since.