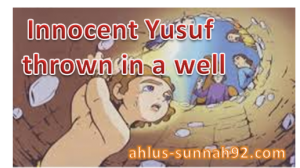 The next morning, as Yaqub(a.s) saw his children off, he prayed for their safety and well-being, especially for his beloved son Yusuf(a.s).  Yaqub(a.s) was a prophet with incredible patience. He believed that Allah would be with his children all the time and would help them in need, although he did not know in what form Allah’s help would come.

The brothers went deep into the countryside, taking their sheep and goats with them to graze on the hillsides. Yusuf(a.s) was cheerful, excited to be out on a trip with his older brothers. He ran happily here and there, and played among them contentedly.

Coming close to the well, they suddenly grabbed Yusuf (a.s), seizing him from behind and grasping him by the arms and legs. He fought so hard to free himself that his shirt was pulled off his back. But no matter how he struggled, he was unable to escape their clutches: they were so much bigger than he was. They dragged him to the well and threw him down into it. He screamed as he fell, but they ignored him.

Although the well was quite deep, it had completely dried up. Yusuf (a.s) landed at the bottom of the well with a thud. He was dazed by the fall, but had no injuries except for some cuts made by the sharp edges of some stones on the inside wall of the well.

There would be no climbing those steep sides to escape. The brothers had run away, laughing and joking; they paid no attention to Yusuf’s (a.s) desperate cries for help. Without food of water, he lay there all alone for three days. He turned toward his Lord in the hope of receiving His help. Yusuf (a.s) may have been betrayed by his brothers, and left to die or to be sold into slavery, but he was undaunted.  He put his trust in God, and his courage never failed him.

Allah revealed His will to Yusuf (a.s) saying: “You shall tell them of all this when they will not know you.”