Abdul Mutallib, due to his deeds and merits, virtues and excellence, determination and value, was an apple of the eyes of all the Arabs. He was son of a glorious father and himself father of ten sons worthy of turning the direction of history.

One day, he was sitting in the Hateem, his ten sons like fierce lions had flocked around him. A Bedouin saw the scene and remarked:

“Allah when decides to incept a new kingdom; He creates such young men to establish it.”

The greatest and the most significant event of his life was invation of Abraha. The king of Abyssinia after conquest of Yemen appointed Aryat his governor, second to whom, he appointed Abraha. Very soon war of the rule and power commenced between them. Both the armies arrayed in front of each other; Abraha proposed to his rival better to play a duel they themselves instead of shedding the blood of innocent people. His rival agreed and both of them fully armed, came to the battlefield, consequent upon duel Aryat met the fatal end and Abraha dominance over the entire nation.

The Temple of Abraha

To please his master, he built a splendid temple and told the king he wanted the Arabs to visit his temple for pilgrimage instead of going to Kaabah. If the Arabs did not heed to his invitation he would demolish the Kaabah to fetch the pilgrims compulsorily to Yemen. The Arabs when became to know the intention of Abraha, they flared with wrath. A man from Bani Kinanah therefore, went into the temple and profaned it by easing himself herein. When the event was narrated to Abraha, his heart kindled with the fire of revenge, he immediately started preparations for invading the Kaabah. The Yemenites, too, had revenge for Kaaba in their hearts, so they decided to fight against him. A Yemenite chief Zu Nafar called his nation to fight against Abraha to protect Kaabah from his profane invasion. The fierce war was fought but Zu Nafar was defeated. Abraha intended to kill him but he said that his life was more beneficial for the king than his death. Abraha forgave his life but kept him in prison.

Abraha on his way to Makkah 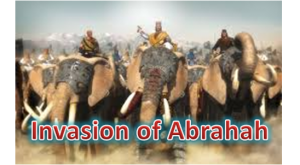 Abraha moved from there and reached the territory of Bani Khutham, who fought against him but luck favoured Abraha this time too. Nafeel when was being killed, he besought Abraha that he might prove a better guide to him in the land of Arabia if he abstained from killing him. Abraha also forgave him for he got two tribes of his, Shehraan and Nahas submitted to Abraha. When Abraha moved to Makkah, Nafeel was his guide. When Abraha passed from Taaif, Masood Thaqfi welcomed him saying, “O King! We are your slaves, ready to obey you. We have no sentiments of opposing you, for the bethel you are going to demolish we have nothing to do with. We shall send with you a man from amongst us who will guide you to Makkah.” The bethel at Taaif had idol of Laat in it that they worshipped and used to take rounds.

The 200 Camels of Abdul Mutallib

The resident of Taaif sent with Abrahah a man called Abu Raghaal as a guide. He led Abrahah to Makkah until he reached Maghmas where he took rest. Here Abu Raghaal passed away and was buried there. The Arabs whenever pass by his grave they throw stones to his grave. Meanwhile, Abraha sent to Makkah, a Negro army officer named Aswad bin Maqsood, an officer of a batch of cavalry. 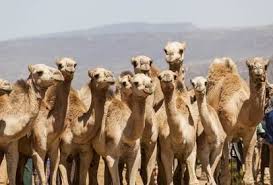 He collected and led the camels of Quresh grazing in the pastures of Tehamah to Abraha. Amongst these camels two hundred belonged to Abdul Mutallib. He was at that time the chief of the Quraysh. The tribe of Kinanah and Huzail of Quraysh intended to encounter Abraha but because of his enormous power they desisted from their intention. Abraha sent his special spokesman Habatah Al-Himyari to the chief of the city of Makkah to tell him that the king had not come to fight against you but to demolish Kaabah. If they would not resist, he would not like to shed their blood. He further bade his man to bring the chief with him if he decided not to fight against the invaders.

Abdul Mutallib on his way to Abraha

Hubatah when arrived at Makkah he asked the Quresh as to who was their chief. He was told the chief was Abdul Mutallib bin Hashim. He called upon him and gave him the message of Abraha. Abdul Mutallib replied,

“We have no intention to fight against him for we are powerless. However, Kaabah is the exalted House of Lord, which prophet Ibrahim (a.s) built, Allah will protect His house, if He does not stop Abraha, we are worthy of nothing to do in this context”

Thus Hubatah believed the Makkahns were not to resist Abraha so he asked Abdul Mutallib to meet the king. He along with some of his sons went to Abraha. When he passed by the army, he asked about Zu Nafar for he was his old friend. He was led to the prison, Abdul Mutallib asked him as if he could help them emancipate from the evil they were befallen.

He replied he was just a prisoner whom the king might kill any time. However, he told that the stableman of the king named Anees was his friend, he might help him. He called Anees and introduces  Abdul Mutallib to him saying he was a generous and an affluent chief from whose dining sheet even the wild animals of the mountain had been filling their stomach. The king’s men had taken two hundred of his camels which he wanted to get back. He requested Anees to help Abdul Mutallib if he could. Anees went to Abraha and introduced Abdul Mutallib. Abraha respected him and himself came down of his throne to sit with him on the carpet. He wanted to sit beside Abdul Mutallib but he did not let him sit on the throne for the soldiers might feel it adversely.

Conversation between Abdul Mutallib and Abraha

Through interpreter Abraha asked what had brought him there. Abdul Mutallib told him he had gone there to get his camels back. When the king heard his reply he said he was much impressed by his personality but the demand he made, lowered his status in his eyes. The king wanted him to talk about the Kaabah, the house of Lord but his demand disappointed the king.

Now Abdul Mutallib gave him a historical reply, he said, “I am owner of the camels only and the house also has an Owner, He will protect it.”

Abraha, with vanity and pride, replied, “Nobody is worthy of protecting Kaabah from my hands.” Abdul Mutallib replied ‘King and God might decided by themselves’.

The supplication of Abdul Mutallib to Allah

Abdul Mutallib, after having met the king, returned to Makkah and appraised the Quraysh of his conversation with the king. He enjoined the Quraysh to go out of Makkah and to take refuge in the mountains’ peaks and valleys lest the king’s army might persecute them entering into Makkah. Then along with a few people, he came near to Kaabah and keeping its curtain, he supplicated to Allah for having dominances over Abraha and his army. He prayed to Allah:

“O Allah! Even man protects his camel’s saddle; You must protect Your house. It may not happen their cross dominates Your house tomorrow, and it is fixed in it. And if You want to set them and our ‘Qiblah’ free, then You may so as You like.”

After having supplicated to Allah, he also ascended to a mountain cave. 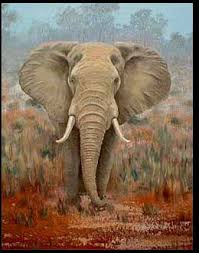 On the following morning, Abraha decided to attack the Kaabah. He prepared his elephant named ‘Mehmood’ and his army too. He firmly decided to dismantle Kaabah and then return to Yemen. When he spurred his elephant to move to Makkah, Nufeel bin Habib came and said into the ear of the elephant:

“O Mehmood! Sit down or go to where from you came, for you are in the holy city of Allah.”

Abaabeel, the birds army of Allah 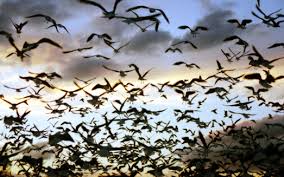 Meanwhile a flight of swallows came from the sea side, holding gram sized stones in their paws and the beaks, they threw stones on the army, whomsoever the stone hit, penetrated into his brain piercing across his iron helmet. The army went disordered, they lost the way back to their homeland and failed to find it. They searched for Nufeel bin Habib, their guide, but found him not for he had gone to the mountain’s peak to witness the chastisement of Allah befalling them. He then said:

“Now no way to flee when Allah is at your chase; and the one lipped Abraha is dominated, dominance is not his destiny.”

There are several other verses of Nufeel, he says to his beloved Rodinah:

“O Rodinah! Would that you have had the sight of the scene we witnessed, it is nice you did not; the thing we lost, you must not repent for. I praised Allah, when I saw the flight of the swallows and when we were subjected to the bombardment, I was trembling. Each one from the army was asking about me as if I was indebted to these Negroes to help and serve them at this hour of need and difficulty.” 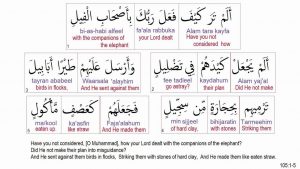 The Fatal end of Abraha

In the army of Abraha was included as many as 13 elephants; all of them died save ‘Mehmood’ for it had refused to advance to Kaabah. The army fled away but whomsoever the stone hit he died away. The condition of Abraha was miserable; his men took him from there but on the way his limbs decayed and dropped, the pus and blood mixed together in his body that gave unbearable bad odour. When they reached Sana taking him with them, he was like a kid of bird. However, before death, his chest exploded causing his heart out of his chamber and thus he met his fatal end.