Musa (a.s) travelled day and night on foot through the vast desert. As he moved farther and farther away from his beloved land of Egypt, Musa (a.s) prayed, “May my Lord guide me to the right path… I surely stand in great need of whatever good You shall send down upon me.” 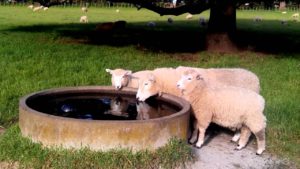 After several days he reached Madyan. Resting in the shade of a rock near the Gulf of Aqaba, Musa (a.s) saw some men drawing water from a well for their animals, while two young women stood nearby, holding back their thirsty flock. He rose to give them a helping hand, taking their sheep to the well for them. The two girls thanked him and went on their way.

Shortly, one of them returned and said shyly, “My father is asking you to come. He wishes to reward you for watering our flock.” Now it so happened that the girls’ father was a pious man and a prophet by name of Shu’yab (a.s).

Shu’yab (a.s) thanked Musa (a.s) for helping his daughters, and listened attentively to Musa’s (a.s) story of his flight from Egypt.

Shu’yab (a.s) liked the strong and trustworthy stranger, and as he was old and alone in the village he needed help.

Taken by surprise, but pleased, Musa (a.s) agreed. Surely this help had come from Allah as a blessing, he thought.

Musa (a.s) travelled across the harsh and waterless Sinai Desert before reaching Madyan, where he lived with the family of Shu’yab (a.s)

Shu’yab (a.s) said to Musa(a.s). “The real truth is that Allah has guided you to me. I am descendant of your beloved Yusuf (a.s) and father Yaqub (a.s) and his grandfather, Ibrahim (a.s). Allah has brought you out of Egypt, not just to become a shepherd, but to complete your instruction with me, for I too am a prophet.” Shu’yab (a.s) told Musa (a.s) he was safe there, and bade him welcome. 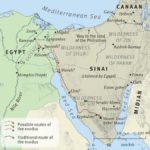 Madyan was the home of a wandering Arab tribe, who were neighbours of the Canaanites. They lived in the dry barren lands on the western edge of the Arabian Desert, around the Gulf of Aqabah. Their main lands in the times of the Prophet Musa (a.s) were in the north east of the Sinai Peninsula to the east of the Amalekites. They lived in tents, kept sheep and travelled on camels.