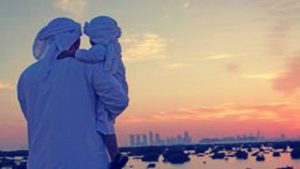 He loved his nephew even above his own children, he never let him disappear from his eyes. In the night, he always got him sleep beside himself. At the time of dining, the meal was not served till the prophet (peace be upon him) joined them all. If he happened to be out of the home, Abu Ta’lib used to send someone to fetch the prophet (peace be upon him) home to dine with.

His blessings were evident whenever he was not present at the meal, for if the household of Abu Ta’lib happened to dine without him, the meal usually proved to be scant, whereas during his presence, it never ended rather it used to be surplus after eating bellyful. To see this Abu Ta’lib used to say, “O! My son you are blessed one”.

It is usual scene, the children awake with their hair scattered, eyes adhered and face pale and withered but the Prophet (peace be upon him) used to awake with his face fresh and clean like the mirror, his eyes filled with antimony and his hair oiled and well combed. Umm-e-Aiman states she never heard the Prophet (peace be upon him), in his childhood, complaining of hunger.

To see the Prophet (peace be upon him) coming and sitting on his seat without hesitation, Hazrat Abu Ta’lib used to say, “The present of my nephew foretells his glorious future.”

In the era, a number of famous physiognomies used to visit Makkah, from whom the people got their children examined and used to ask their future. Such was also happened with the Prophet ( peace be upon him), some of the events are shared with the readers here.

The real name of Abu Ta’lib was Abd-u-Manaaf. False is the belief of the Rawafiz who name Abu Ta’lib as Imraan and wrongly claim that Surah Aale-Imran refers to the family of Abu Ta’lib.

The verse in question is, “Verily, Allah chose Adam, Noah and family of Abraham and the family of Imran above the Alamin (mankind and Jinn)”

This is the 33rd Verse of Surah Aale-Imran and in its 35th verse, the Qur’an clarifies as to what is meant by Imran? Allah says, “Surely Allah chose Adam and Noah and the House of Abraham and the House of Imran (Allah’s blessings and peace be upon them all) above all the people of the world.”

Even the children know the wife of Imran was mother of Hazrat Maryam and Imran was her father and not the father of Abu Ta’lib.

One of very cogent reasons, the Qur’an being a revealed book, is that it explicates itself and does not allow anyone to make transposition of its words and their meanings at his own will and desire.