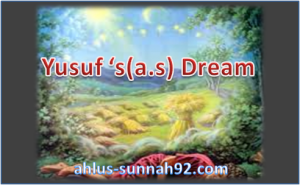 One day Yusuf (a.s) had an unusual dream. In the dream eleven stars and the sun and the moon all bowed down to him. When he woke up, he hurried to tell his father about this strange dream. Yaqub (a.s) understood right away that great things lay in store for his young and best-loved son. This had been make plain in the dream. Sensing that his half brothers might become jealous of him and try to harm him, Yaqub (a.s) warned Yusuf (a.s) not to tell them about it:

“My little son, do not tell your brothers about your dream lest they hatch a plot against you, for Satan is the open enemy of man.”

Yaqub (a.s) cautioned his son. “The Lord has chosen you, Yusuf (a.s), for a higher purpose. He will teach you to interpret dreams, and will perfect His blessings upon you.”

He told Yusuf (a.s) that Allah would bless him and their family in just the way He had blessed his grandfather Ishaq(a.s) and his great grandfather Ibrahim(a.s).

The ten half-brothers were aware of their father’s great love for Yusuf (a.s). They would go off to look after the family’s flocks grumbling and muttering, and saying: “Surely our father is clearly wrong.” They were so jealous of Yusuf (a.s) that they would band together and fume a plot against him. But they did not dare tease him or hurt him openly, because their father was always nearby and would have been very angry. The young Yusuf (a.s) was innocent and did not even suspect his brother’s guile and hatred. The ten brothers not only hated their innocent younger half-brothers, Yusuf (a.s) and Binyamin, but they were disrespectful to their father, treating him as an ignorant old fool.

Yaqub(a.s) of course, was nothing of the sort. Like his father Ishaq(a.s) and grandfather Ibrahim(a.s), Yaqub(a.s) was a wise and noble man, a prophet who had been commanded by Allah to pass on the knowledge of the One God to the tribe and to the family. Some took heed of what they said and some did not; overall the family benefited from having such ancestors. But when Yaqub(a.s) tried to teach his own older sons anything, they would not listen to his words of wisdom.

The Meaning of Dreams 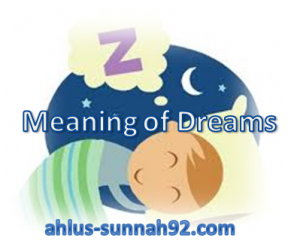 According to the Holy Prophet ﷺ you can have three kinds of dreams: you can dream about something from your heart, you can have a frightening dream from Shaitaan, and you can have a dream that contains good news from Allah. The dream of a prophet is always a prophecy from Allah, which may be direct or symbolic.

The prophet Yusuf’ (a.s) dream of eleven stars and the sun and the moon was a clear prophecy. One day he would be so much higher in rank that, when his brothers saw him, they would not even recognize him. And perhaps one day they would stand in need of him, and he would be in a position to help them, putting them to shame for their present plotting and betrayal.

But it is not always easy to interpret a dream, to tell what it means. The ordinary person could only guess, and as we shall see later in our story, even the wisest men of Egypt couldn’t begin to fathom a strange dream the king had.

Only Yusuf(a.s) had that insight. He explained that his ability to interpret dreams was one of the gifts he was given by Allah.

A Plot is Hatched