What is Zakat about:

My dear brothers and sisters, 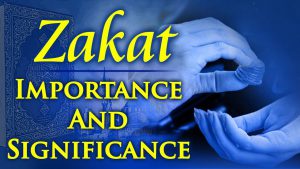 alah, Zakat is the greatest pillar of Islam. Generally, since in the usual series of Ibadat fasting immediately follows Salah, people have come to understand that fasting is as next to Salah. But from the Holy Quran we learn that in Islam Zakat stands second in importance to Salah. These are the two great pillars on which rests the structure of Islam. If these are removed Islam cannot survive.

Zakat means purity and cleanliness. A portion set apart from you wealth for the needy and the poor is called Zakat because in this manner a man’s wealth and along with it his own Nafs (self) become purified. The wealth of that person is impure who does not take out from the God-given wealth what is due to the poor and the needy. And along with his wealth his Nafs too is impure because it is filled with ungratefulness. His heart is so narrow, he is selfish and so much a worshipper of wealth that it pains him to render what is due in return for the Divine favor of bestowing on him wealth in excess of his real requirements.

Can it be expected from such a person that he will ever do any good deed to please Allah and will make any sacrifice for the sake of his religion and faith? This is why the heart of such a person is impure as also his wealth which he amasses in this manner.

By making Zakat obligatory Allah has put every person to test. That person alone who willing takes out what is due to Allah from that wealth which exceeds his requirements, and helps with it the poor and needy, is useful for Allah and is worthy of being counted among the faithfuls. And that one whose heart is so narrow that he cannot make this much sacrifice for the Lord of the world, is of no use to Allah. He is absolutely unfit to be included in the community of the faithful. He is rotten limb which may better be severed from the body, otherwise it will putrefy the whole frame.

This is why when after the demise of the Holy Prophet ﷺ when some tribes refused to give Zakat, Hazrat Abu Bakr Siddiq (may Allah be pleased with him) waged a war against them, as is done against the unbelievers even though they use to say Salah and professed faith in Allah and His messenger. From this it is clear that without Zakat, Salah, fasting and affirmation of faith are all useless. None of these is credible.

Zakat obligatory on Ummahs of all Prophets

Look into the Holy Quran. You will see that from ancient times Salah and Zakat were ordained as compulsory for the Ummahs of all prophets and the Islamic religion was never bereft of these two items during the period of any prophet. After mentioning about Prophet ibrahim (may peace be upon him) and the Prophets of his race, Allah says in the Quran:

“And We made them leaders of men. They guided the people according to Our command, and We inspired in them the doing of good deeds and right establishment of Salah and giving of Zakat and they were worshippers of Us.” (21:73)

About Prophet Ismael (peace be upon him) it is said:

“He enjoined upon his people Salah and Zakat and was acceptable in the sight of his Lord.” (19:55)

Prophet Musa (peace be upon him) prayed for his people:

Do you know in reply to it what Allah said?

“I shall smite with My punishment whom I will. Although My mercy embraceth all things, but I shall ordain it for those who will fear Me and give Zakat and those who will believe in Our revelations.” (7:156)

Since the people of Prophet Musa (peace be upon him) were narrow-minded hankered after money, just as you see the condition of Jews even today, Allah plainly said in answer to the prayer of such a distinguished prophet: “If your people will give Zakat steadyfastly, then the promise of My mercy is for them, otherwise listen clearly here and now that they will be deprived of My mercy, and My punishment will encompass them.”

Similarly, even after Prophet Musa Bani Israel were repeatedly admonished on this account. Time and again convenants were taken from them to worship none save Allah and to be steadfast in Salah and Zakat (2:10) till ultimately a clear notice was given:

“And Allah said: O Children of Israel! I am with you, if you offer Salah, and give Zakat and believe in My messengers and support those messengers who are to come, and lend unto Allah a nice loan surely I shall remit your sins.” (5:12)

Before Prophet Muhammad ﷺ the last prophet was Prophet Isa (peace be upon him). The commandment about Salah and Zakat was given to him also by Allah, as is found in Surah Mariam.

“And hath made me blessed wheresoever I may be and hath enjoined upon me Salah and Zakat so long as I remain alive.” (19:31)

This shows that the religion of Islam has been established from the beginning, in the ministry of every prohphet, on the two great pillars of Salah and Zakat, and it never happened that any Ummah believing in Allah was exempted from these two obligatory duties.