When the caravan arrived, probably in the ancient city Memphis, Yusuf (a.s) was sold for the paltry sum of 20 dirhams (small silver coins) to a nobleman, who took him into his service. The man who bought Yusuf (a.s) was from the royal court and bore the title Aziz (a title which was given to people of high rank such as governors). His name was Fitfir, or Potiphar. 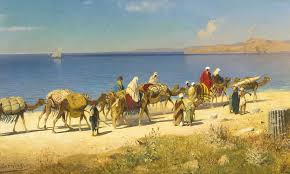 The Aziz sensed immediately that there was something very special about this young man. Yusuf’s handsome presence, his winning ways, his innocence, his intelligence and integrity, combined with his courtesy and noble manliness, greatly impressed the Aziz.

A nobleman himself, the Aziz guessed that Yusuf (a.s) must also be from a noble family. He, therefore, brought him home and instructed his wife to take care of him, and asked her to treat him as a honored member of the household, adding that as they had no children, they might later on adopt him as a son.

Thus, according to Allah’s plan, Yusuf (a.s) was brought from a small village to the most advanced city of the age to be trained and to carry out some purposeful task.

At the time of our story the ancient city of Memphis was the largest city in Egypt.  It was founded in 3000 B.C., when Upper Egypt and Lower Egypt were united. This was the beginning of Egypt’s dynasties. 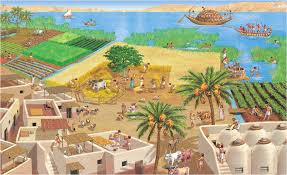 Though Egypt’s boundaries are much wider, that land is so dry and barren that very few people can live there. Egypt’s population has always been clustered along the life-giving Nile, the world’s longest river, which flows all the way from Ethiopia.

Once a year the river overflowed its banks. This was terrible for the people, because their houses and lands would often disappear beneath the waters. Even worse, the river changed its course every year when the waters were reaching their highest level.

But the floodwaters also carried all sorts of earth and sand from further south, and deposited it on the land. This living matter, called silt, is a natural fertilizer that makes crops flourish. It was this, along with the water itself, which for thousands of years made Egypt one of the richest lands in the region. As a result, the Egyptians developed a mighty empire with powerful kings, who were later known as Pharaohs. 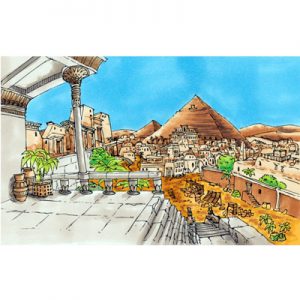 Memphis was located at the head of the Nile delta, where the delta joined the valley. It was an excellent position from which to govern both lands, and Memphis remained the capital throughout the Old Kingdom. By the time Yusuf (a.s) arrived in Memphis, some 1500 years later, the Old Kingdom had broken down, and there were a series of so-called intermediate dynasties, including several founded by invaders from the East, that ruled Egypt.

In those days every king built himself a new palace and government buildings, so the size and shape of Memphis kept changing. But the major temples and the shipyards and harbor remained the same, and the city continued to flourish, and later had large foreign communities.

The city’s name – in Egyptian, Men-ofer – means “established and beautiful”. Indeed, it was. The city had grand buildings and temples. It had big markets and broad public squares. It was in one of these squares of this bustling city that Yusuf (a.s) was auctioned as a slave.

The temptation of Zuleika